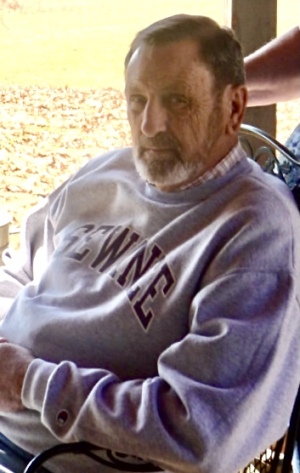 William Larry Goodman of Winchester age 74 passed this life after a courageous battle with cancer, Wednesday, February 24, 2021, at home surrounded by family. Larry was born September 3, 1946 in Sewanee, TN. He is preceded in death by his son, Mark Andrew “Andy” Goodman, parents Ward and Frances Goodman, infant sister, Linda Lee Goodman, in-laws Luther and Margaret Davis, brother in-laws Johnny Davis, Mitchell Quick, Joe Bean and sister in-law Tammy Davis. He is survived by his wife Linda of 52 years, daughter Katie (Rodney) Hill of Decherd, daughter in-law, Tonya Goodman of Estill Springs, TN and the lights of his life, Fischer Goodman and Hunter Harrison. He was their Papa. He gave life to imaginations that dreamed up tall tells of bigfoot, slappy, and other monsters that only Papa could bring to life. He gave them a love for fast cars, monster trucks and green tractors. Additionally survived by sisters Barbara Jo Quick of Batesburg, SC, Frieda (Jackie) Sherrill of Hillsboro, TN, brother Ronnie Goodman of Sewanee, TN, and many nieces, nephews, brother and sister in-laws, cousins and friends. He began his education at Sewanee Elementary through the eighth grade then attended the Sewanee Military Academy and University of the South, leaving the University to enlist in the United States Navy. He graduated from the U.S. Naval Training Center in Great Lakes, IL, Naval Submarine School in Groton, CT and Naval Guided Missiles School in Dam Neck, Virginia Beach, VA. He completed tours on the USS Thomas A. Edison (SSBN 610) (Gold). While in service, Larry was awarded the Good Conduct Medal and the National Defense Service Medal. He continued his work in electrical engineering throughout his career. He also previously served as a Franklin County Commissioner for District 6 Seat B. From an early age, he loved reading, fast cars, taking things apart and finding out how they worked. His childhood hobbies became adult hobbies, evidenced by the things around his home. Larry and Linda loved to see new places and adventures along the way. He was a man of few words. His actions spoke louder than words.  The family is heartbroken over the loss of Larry. However, this is the Lord’s celebration. Larry and Andy have been reunited on the streets of gold in Heaven. Visitation will be Saturday, February 27, 2021 from 5-8:00 p.m. The funeral service will be conducted on Sunday, February 28, 2021 at 2:00 p.m. Interment will be held at Eastern Star Cemetery in Sewanee with Military Honors. Friends will serve as pallbearers. Pastor John Burge will officiate. In lieu of flowers, the family asks that donations be made to Winchester Christian Academy in Honor of Fischer and Hunter Hill or Multi County Cancer Support Network. The family requests that COVID precautions are followed.