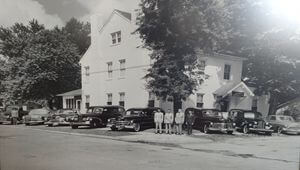 This firm was established by Mr. William Lester Steed.  He was born July 29, 1878 near Spring Place, Georgia.  His father was was a Southern planter and his paternal grandfather was an Englishman by birth, who upon coming to this country, settled in Georgia.  Mr. Steed was associated with a furniture and undertaking establishment in Dalton, Georgia.  Upon his arrival here in 1909, he along with H.B. Herrin, also from Dalton, purchased the furniture and undertaking business of the Rice Furniture Co.  However, the partnership ended with Mr. Herrin's decision to return to Dalton.

It was around 1911 that Mr. Steed's brother-in-law, E.H. Leonard became his partner.  The Steed-Leonard Co. was located on the public square in the building now occupied by Designer Cakes.  An ambulance service was added in 1925.

n 1926, Steed-Leonard discontinued the furniture business in order to dedicate their entire time to funeral service.  Mr. Leonard left the firm in 1928 to enter the insurance business in Chattanooga.  He died in 1936.  From 1927 until his death on February 18, 1931, Mr. Steed was a partner with Mr. J.C. Moore in the firm of Moore & Steed.  Dedicated to the continuance of the business, Mrs. Dessie C. Steed opened the Steed Funeral Home on April 1, 1931.  It was located on First Ave, North in a part of the building now occupied by M & J Surveys.  She was assisted in it's operation by Mr. Robert E. Smith who was employed by Mr. Steed, and by Mr. Robert L. Sims.

In June of 1936, the need for larger facilities brought about the move to a location that would serve as the firm's home for the next 32 years.  The building, known as the J.C. Hale residence, located at the corner of North Jefferson St and Second Ave, North, was one of the first brick homes constructed in Winchester.  It was believed to have been built in the early 1820's.  The old home was meticulously remodeled and converted into a modern funeral home.  That structure no longer stands, as it was demolished in 1974.  The Maytag Laundromat is located on that site now.

Mrs. Dessie Steed sold an interest in the firm to Mr. Floyd Anderton in June of 1937.  The name of the firm became Steed-Anderton Funeral Home.  Mr. Anderton had served as Franklin County Trustee, Clerk & Master of the the Franklin County Chancery Court, and was the first president of the Franklin County Chamber of Commerce.  Being a civic-minded individual, he was very active in community activities.  His son, Dr. Jo C. Anderton practiced medicine in Franklin County for many years.  Later in 1937, Robert Sims became a partner, and the firm become known as the Steed-Anderton & Sims Funeral Home.  And so it continued to be known until 1948 when Mr. Sims sold his interest in the firm and moved with his family to Florida.  he returned to Franklin County in 1952 and established the Sims Funeral Parlor in Decherd.

Roy B. Watson, who was born in the Gum Creek community of Franklin County, graduated from the Gupton-Jones College of Mortuary Science in June of 1947.  Upon his graduation, he was employed by the former Cosmopolitan Funeral Home in Nashville.  In 1948, he was called to return to his native Franklin County, and was hired as a Funeral Director and Embalmer for Steed-Anderton.  In 1956, Mr. Watson, along with B.O. Huffman, Jr. and Robert Sims purchased interests of Mrs. Steed-Anderton.  Both were renamed Sims-Watson & Huffman Funeral Home.  The Decherd location remained open until the mid 1970's.  Mr. Sims continued his association with the firm until 1964 when his partnership was purchased by Mr. Watson and Mr. Huffman.

The facilities at North Jefferson and Second Ave had served their purpose well since 1936.  However, by 1968, the need for expansion and modernization necessitated the move to a new location.  The antebellum structure located at 300 South Jefferson St, known as Syler's Tourist Home was chosen as the firm's new home.  A complete renovation of the building, as well as the construction of a chapel began in 1967.  The move to that facility took place in the spring of 1968.

A history of striving to provide superior service to this community led to the planning and construction of the present facility.  This is the first facility constructed in Franklin County specifically for use as a funeral home.  Construction began in 1993 and was completed in May 1994.  The last funeral service at the South Jefferson St location was conducted on May 14, 1994, and this facility was formally opening the following day.

Many fine employees have been associated with this firm.  Among them were Mr. Johnson Gulley and Mr. Sam H. Powers, both who served for many years.

A spirit of vision and a desire to minister to the people of this community has motivated the individuals involved in the operation of this establishment from it's founding by Mr. Steed through the present.  With that spirit and desire, Mr. Thomas H. North, Jr purchased the firm in 2004.

A year of daily grief support

Our support in your time of need does not end after the funeral services.  Enter your email below to receive a grief support message from us each day for a year.  You can unsubscribe at any time.